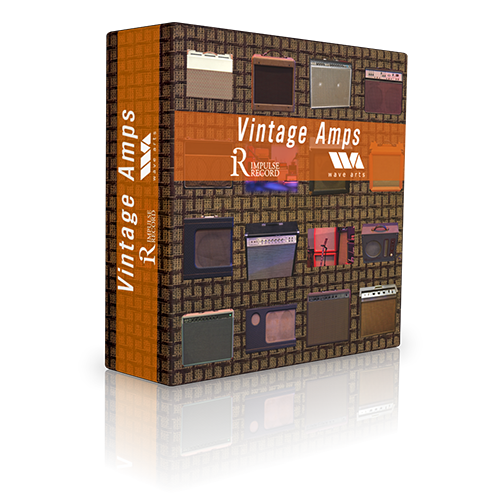 The Convology XT Library of Vintage Amps is really second to none, with 17 different physical vintage amps being sampled.
Vintage amps and cabinet impulse response files, in general, tend to be an EQ response rather than a spatial response, although,
many of these amps came with spring reverb units with all of those being sampled, in this library, along with Tone Control, Bass,
Treble, Mid with varying intensity, etc. Vibrato and Tremolo are generally handled through software emulations, rather than
impulse response capture by the nature of those functions, much like Chorus and Flange are real time processing based and not
recorded over a set period of time, like a reverb or delay is. In other words, a reverb or a delay is not finite (there’s a
start and there’s an end) and so the impulse response can be taken within an “acoustical snap shot” from start to finish.

This library is full of prized amps made popular through the years by many legendary guitar players and also includes rare and
creative gems not seen in most impulse response convolution library offerings.

These cabinet impulse response files, coupled with many built in vintage spring verb units, is truly one of a kind.

A special thanks to our friend Brent who made this section of the library possible.

1957 Gret Electro 14 watt amp weighing around 24 lbs.  Two 11 x 6 inch elliptical  speakers.  Output transformer mounted on the left speaker.  Housed a 5 inch  tweeter.  With their guitars gaining in popularity, being endorsed by a number of major artists in the 1950s and 1960s, Gret made the move to start building and manufacturing guitar amps to go with them.

1958 AC30 The early AC30s featured a style reminiscent of the tweed Fen amps, and had a single 12-inch 60-watt speaker.  Later they developed into the conventional twin 12-inch speaker configuration.

1958 Fen Cha The Fend Cha was an evolution of the Champion 600 and 800 models, manufactured in the late ’40s.  This Champ is of the original design, tweed-covered, with a 4 watt amp and 6-inch speaker.

1962 AC30  AC30 included two channels with two inputs. There was a single tone control.  This amp was used extensively by a famous British group that came to the states in the 60s.  it is still in demand and a true classic today.

1962 Amp Rock Amp designed a cathode-biased tubes amp, power at about 18 watts.  This was one of the first amps with onboard reverb. This was very much a different design for Amp and somewhat unique for its day.

1964 Gret 6150 This tube amp was made for Gret by Val and The Snowflake, is becoming increasingly rare.  These small amps pack in a lot of sound.

1965 Fend Tw Mas The Fend Tw, first produced in 1952, has seen a lot of changes with a wide variety of models manufactured.  Known for a clean tone, this Fender Twin is no exception.

1966 Gib Sct The Gib Sct, is a solid amp with built in spring reverb.  Came with a 10” speaker along with reverb and tremelo.

1970 Fen Dluxe From the “Brown Faced” era.  12” speaker.  This amp is a real favorite among users who like to hear “presence’ in the mix.

1977 Mars Or This cabinet could handle 300 watts.  The head could handle two channels with independent reverb.

1996 Pros Verb This amp incorporated true Class A power amplifier in the “A” position, unlike many other amps that claimed to be Class A.